Jack
closes Nov 15
SBFFTXFTX Insolvency Crisis
How much will we believe SBF committed willful fraud in the FTX collapse after 1 year? [Poll, resolves to avg %]
85%
chance
1D
1W
1M
ALL

This poll https://forms.gle/5yLeSZhNfs7fE5Vq6 asks participants: "What do you believe was the probability that SBF committed willful fraud in the FTX collapse?

This is meant to measure the community's current beliefs. Please respond to the poll if you're interested.

In 1 year (November 2023), I will create another instance of the same poll. Resolves to the average (mean) poll response at that time.

In the immediate days after the FTX collapse, a lot of people have quickly concluded that it was willful fraud (e.g. that FTX intentionally loaned out customer deposits which they had committed not to). With the limited information available early on, I believe there is substantial but far from conclusive evidence in favor of this, and that the evidence and information is rapidly changing, and that many people are jumping to conclusions too quickly. You can find a copy of a post I made on this topic at https://manifold.markets/post/in-defense-of-sbf#jIGvMdkFDKDltmegirwJ tl;dr: FTX's failure to hold customer deposits as fully backed deposits seems like it could very plausibly be a combination of bad judgement, terrible accounting practices, and mistakes rather than fraud. I'm not claiming it's likely, just claiming that it's not beyond a reasonable doubt.

This market is an attempt to quantify the degree of certainty the community has on this question. Many people have been acting as if it is basically 100%, while a seemingly smaller minority believes it is substantially less. This is a type of prediction quesiton, and of course we can resolve different predictions by making a market on it.

I think this one depends a lot on who gets polled

One thing that potentially helped with the current poll is that it was featured so that anyone on Manifold who was interested in the subject had a chance to see it and respond, instead of only people who were already following the market.

@jack Are you gonna aim for a big poll or a select group?

@NathanpmYoung The intent for this question was a poll open to anyone, as per usual Manifold poll practice. If you have ideas for what sort of select group might give better results, I'm interested in hearing them.

Nathan Youngis predicting NO at 87%

@jack I guess you could ask manifold to build polls

@NathanpmYoung That would be a potentially nice feature but I don't think it makes a huge difference - the poll here is already getting a decent number of responses, and I can gather more information this way than with a Twitter-style poll.

@jack What's the current mean? Also naaah it will get so many fewer responses. @Austin can you build a little app for taking polls in comments?

@NathanpmYoung There are two common ways I've seen to do polls like this that are lighter weight and don't require new Manifold features:

But I'm not convinced getting more responses improves poll accuracy. In fact it might make it worse. I think to help mitigate selection bias, it would be better to get a random sample of the Manifold community (probably limited to those with some familiarity with FTX), and poll them.

I have committed not to reveal the current mean until the current instance of the poll finishes at the end of January.

Nathan Youngis predicting NO at 88%

Firstly, every question should have a wiki for info and a way to tip people who add it.

I don't know what the definition of fraud is, but SBF allowed money which customers had specifically earmarked to not be risked to be risked. And it was $8bn. That's not an amount you can do by accident. What's more Ellison's testimony said they were doing this longer than we previously thought. How can we argue at this point that this either wasn't fraud or wasn't willful?

Nathan Youngis predicting NO at 88%

This is the current situation, which is perhaps an average of 74%. I don't like this but I think that number is only gonna go down. 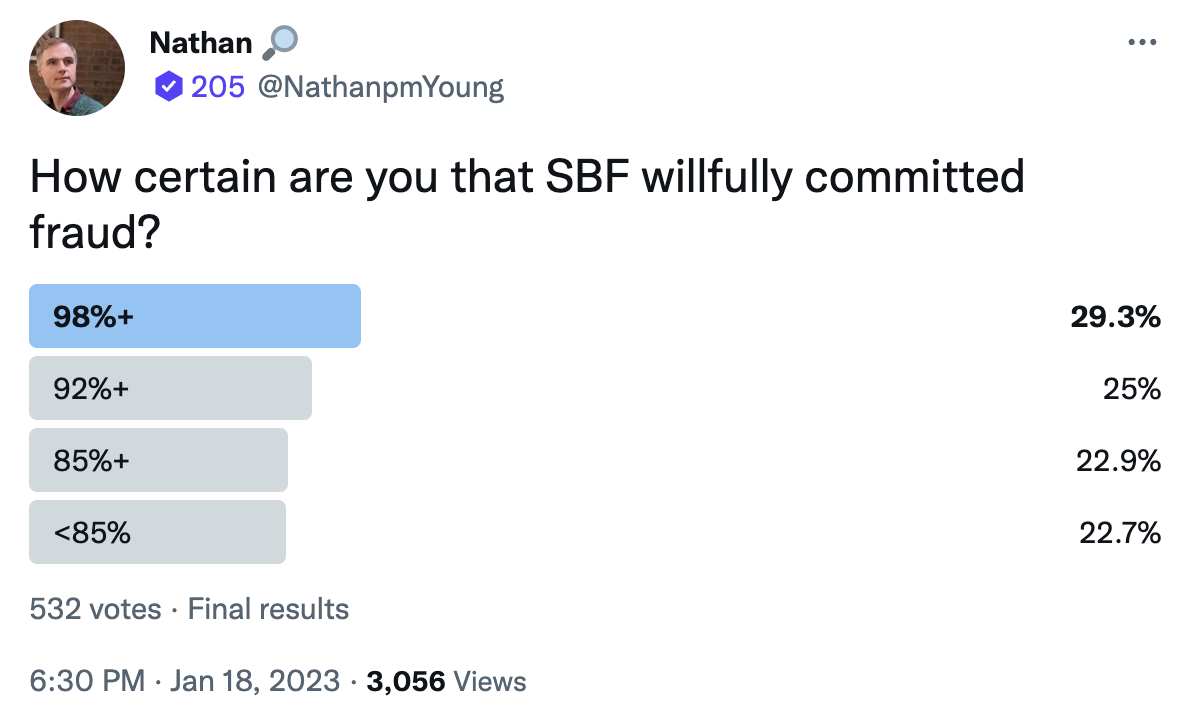 I just found SBF's intended congress speech, which puts me ever further into the sympathetic camp: https://www.forbes.com/sites/stevenehrlich/2022/12/13/exclusive-transcript-the-full-testimony-sbf-planned-to-give-to-congress

@Austin Sympathetic as in he fucked up and deserves sympathy or as in he didn’t willfully commit fraud?

@Austin What do you intend to vote here, if the vote was today?

@NathanpmYoung There is a poll today - not for this market, but for /jack/how-much-do-we-believe-sbf-committe

You can respond to the poll here: https://forms.gle/5yLeSZhNfs7fE5Vq6

Can this say "resolves to avereage %" in the title.

Here's a poll to measure the community's current beliefs - if you are interested please fill it out!

(This poll is not going to be used to resolve the market - that will be by another poll in November 2023.)

@Preen I currently plan to post results at the end of January.

And here is a market where you can predict on the poll result:

@jack Are you able to see the partial results? Would be wise not to trade against you if so 👀 lol

@Preen I am but I'm trying not to look at them too much or leak partial info via my trades haha. I do feel comfortable trading on this market based on other people's predictions of the poll though!

The trial, assuming there is one and it begins as scheduled, will be at its early stage when the market closes. By then, either SBF will have pleaded guilty or evidence and testimony will start piling up during trial. I'd be surprised if poll response then is not over 95%.

@NicoDelon Good point. I also created another market that will run until after his trial:

Nathan Youngbought Ṁ200 of NO 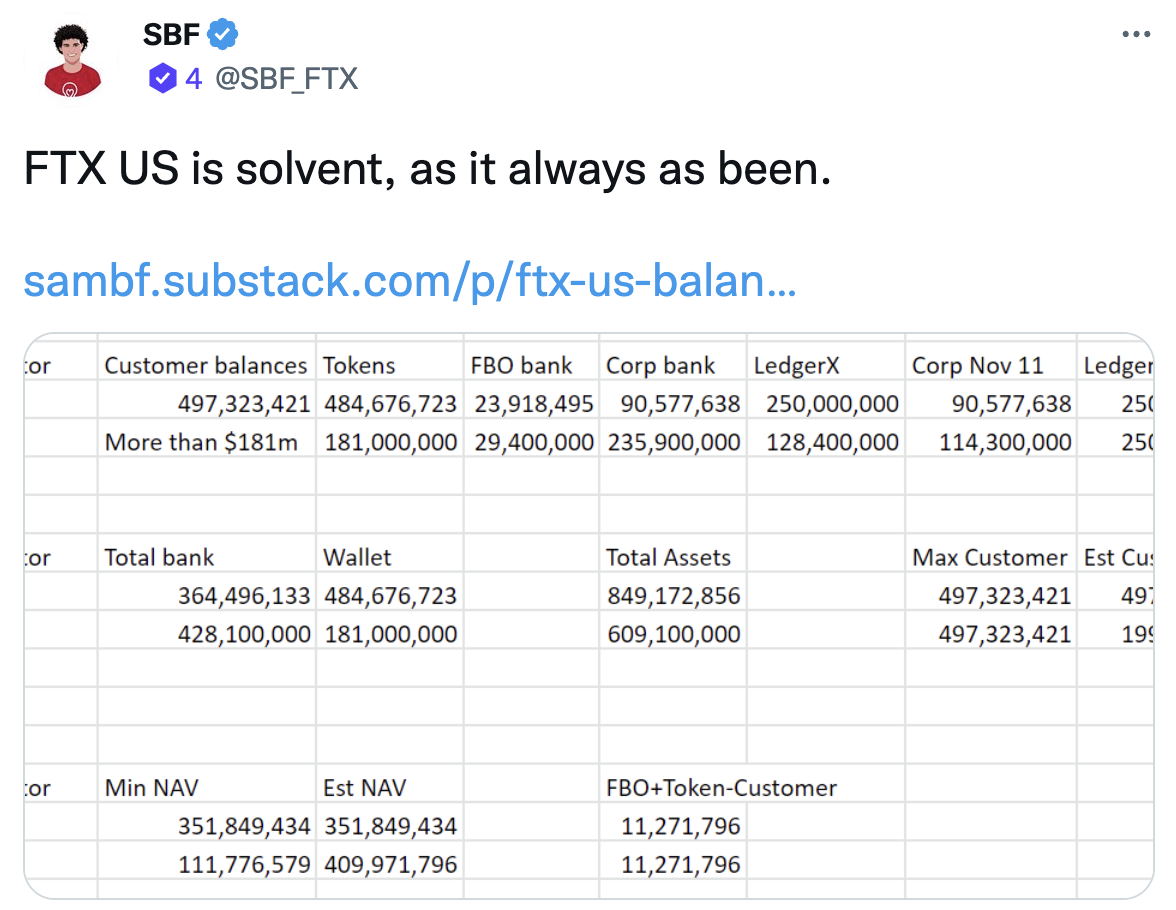 I don't think it's surprising that SBF is kind of missing the point on this, given that the point puts him in prison.

Manifold in the wild: A Tweet by Nathan is in SF (say hi 👋)

Very open to correction, but: I get the vibe that this market is a bit high. Feels like there is a chance that FTX_US is solvent (70%?) and that FTX depositors get back more than 50% of their assets (20%?) at which point, SBF would look a lot better. https://manifold.markets/jack/will-we-believe-sbf-committed-willf https://twitter.com/SBF_FTX/status/1615507065337958401 https://t.co/ZPxfZkOL5c

I keep forgetting this will be resolved by poll not some weird average of the market price or something, shoulda bid at 86 t'other day

some people did something

It actually seems quite consistent with what I previously expected for the "incompetence and having zero ability to do proper accounting" hypothesis. Certainly he lied about SBF and Alameda being at arms length, but I thought that was already well known.

SBF seemingly being brutally honest in a lot of this discussion - a lot of things he's saying probably look terrible to most people. And this is what he says about customer deposits (in the "On what happened" section) - so far consistent with what he's said before, probably more evidence will come out over time to either back or contradict this story: 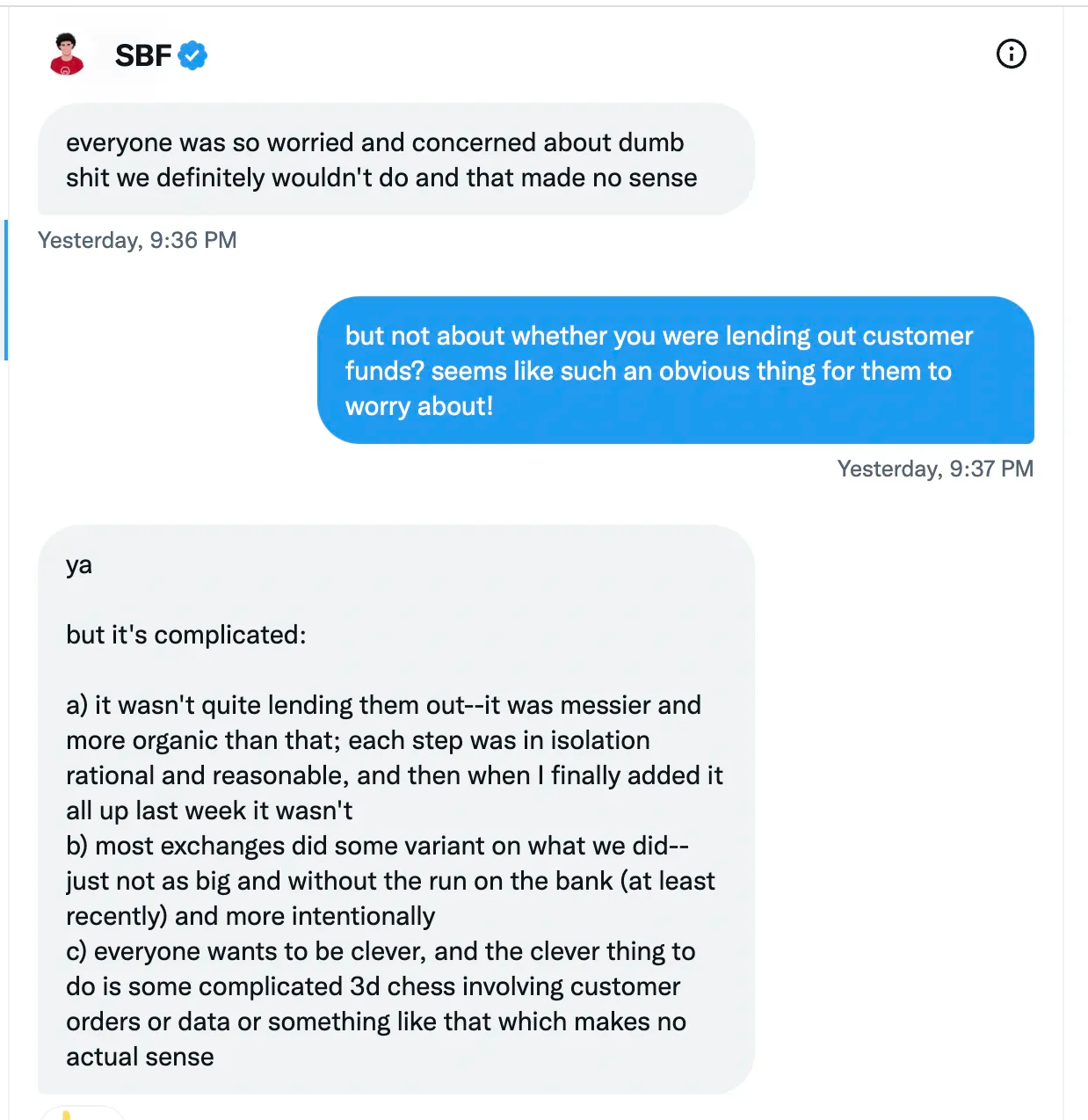 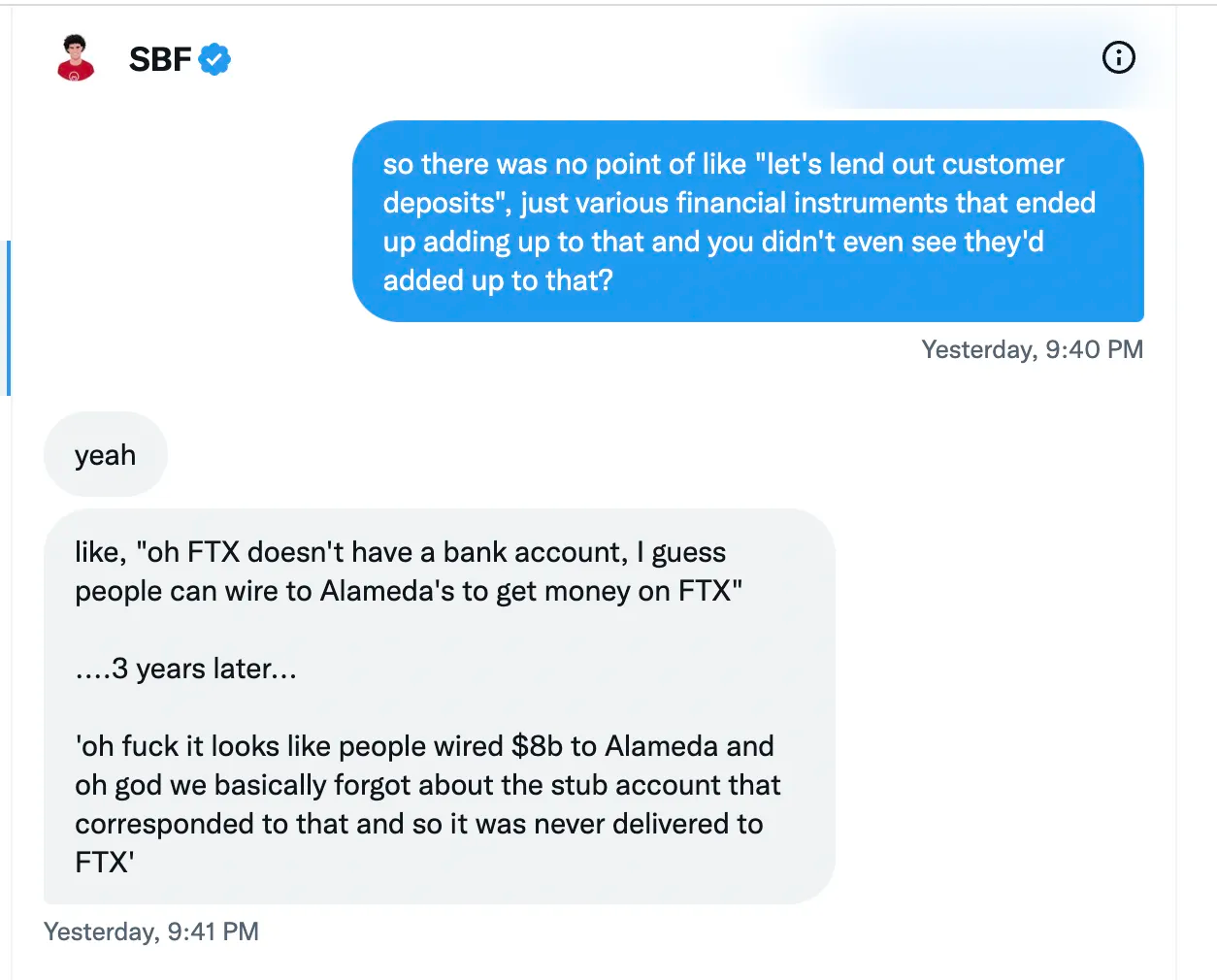 Hitler spent his trial in Munich giving speeches and getting a very light sentence. One would suspect the judge will be similarly friendly to SBF, with a very “connected” prosecutor just happening to make major mistakes, and even a DC venue. Not crazy to see a get out of jail free settlement or friendly jury and incompetent trial.

That said, a few B could have been lost through poor internal controls and Alameda lying to Sam, but the evidence of the amount of losses, six months of cover-ups, and his behavior make it very clear it was fraud.

He’s a great marketer for a reason, and my guess is you are smart enough to look past the motivated reasoning. The later public statements are obviously fraudulent and the activity went vastly far beyond some accidental early mistake.

Nathan Youngis predicting NO at 81%

@Gigacasting I'm 80% sure this won't happen. But I think the community vote just won't be that damning. Few of us are gonna say 100% and then many more people will give lower values.

@NathanpmYoung I think people will say 99% if the evidence supports it. I could run an experiment asking about say Enron for comparison.

Nathan Youngis predicting NO at 82%

Or maybe wait a month and run one for FTX?

@NathanpmYoung Theoretically the market prediction now, or at any given point in time, should match the poll results at the same time - if not, it means people have irrational beliefs

"In a video meeting with Alameda employees late Wednesday Hong Kong time, Alameda CEO Caroline Ellison said that she, Mr. Bankman-Fried and two other FTX executives, Nishad Singh and Gary Wang, were aware of the decision to send customer funds to Alameda, according to people familiar with the video."

it seems like this demonstrates that there was a known decision?

@tcheasdfjkl thanks for the link, now that I think about it I did see this mentioned but I also thought sbf was still denying it was intentional even after that date. I'm confused now whether they knew this was in violation of their user agreement.

@jack would you consider it not intentional if they didn't?

I think I would expect that if they thought this was allowed then more than four people would have known about it at some point, given that it was a lot of money? like it would come up at some point in company strategy discussions and someone at some point would go "uh, what". instead we got a situation where the legal/compliance team resigned once the scandals started.