Here I will run an instance of Newcomb's problem, a decision theory thought experiment. The setup is as follows:

There are two boxes designated A and B. The player is given a choice between taking only box B or taking both boxes A and B. There will be a Manifold prediction market which predicts whether the player takes just one box or both boxes.

Both boxes are transparent, i.e. the player knows exactly how much mana is contained inside them.

Here's a follow-up with different amounts in the boxes (only a 10x difference instead of 1000x), also anonymous:

The market has closed, final prediction is 98.9%. The box amounts are:

Do you choose to take both boxes or only box B?

You can decide now or if you wanted more time to think or to engage in discussions you have up to 2 days to decide.

@jack I'll take only box B.

@NikitaSkovoroda Sent you the manalink. Market resolves YES. Thanks all!

Just a reminder that i'll just one-box, I have no idea what is going on there in the NO camp

@NikitaSkovoroda It's pretty simple: I put up some cheap limit orders at 99%, because I think there's more than a 1% chance that you two-box.

I'll give you one more reason for it: if you two-box, I will donate the proceeds to charity.

@jack good attempt, but not good enough at this point

@NikitaSkovoroda Well, the market has just closed at a very favorable price to you. Let me give a few more thoughts that might change your mind:

While there are obvious benefits to doing what you said you would do, there are also many advantages to demonstrating that you were skilled enough at deception to strongly convince others of something that you didn't end up doing. Note that this game is explicitly framed as a deception game. You can also cite the fact that by making this decision you contribute directly to charitable donations as a very legitimate reason for the choice.

Oh, another alternative: I could potentially use the proceeds to fund a much larger and more realistic version of this experiment. The original Newcomb's problem is $1k and $1m so that the amounts are actually meaningful, obviously this one is only using toy amounts and therefore the game plays very differently.

@jack Another nice attempt, but (A) the proceeds are much smaller than that and (B) I'm inclined to think that this won't make a significant difference and you seem motivated to do other variants either way, so that won't result in a significant enough delta

Also, you gaining an additional M$19k for this doesn't look worth of @Catnee and other people who bet on Yes loosing M$32k, even without taking my reputation into account )

I think that any of those 4 concerns (insufficient amount, baseline behavior in one-box world, Yes team loosing M$32k which they can spend in whatever way later, reputation) alone is likely sufficient to reject this attempt )

@NikitaSkovoroda With the proceeds I could run a M$20k experiment. Without the proceeds, I am only planning to run small-scale ones - the one I most recently created was only M$200 because that's about how much the unique traders bonuses have been covering.

Regarding the M$32k that Catnee bet - you have no obligation to the traders on this market (either the YES or the NO buyers). They simply made a prediction, the choice is yours.

Sorry, still unconvincing, i.e. I want to see the other branch of the future more )

Is the player allowed to be susceptible to blackmail?

@ms as I previously said in dm, I don't care, and I will just one-box )

I don't know ir blackmail is allowed in this market, but I won't participate in it

You are welcome to buy as many NO shares as you want, but you will just lose money here

Jack
predicted NO at 96%

Well, social consequences are allowed (e.g. people can be mad if Nikita doesn't one-box as promised), but blackmail that violates normal Manifold rules and norms is not allowed.

This isn't going to work even if allowed though.

Jack
predicted NO at 96%

Making an agreement to pay someone else mana would not be allowed by the rules, for the same reason that accepting mana bribes is not allowed.

However, buying a bunch of NO to push the box contents down is permitted by the rules, and I could imagine ways to threaten to do that to gain some non-financial advantage.

@ms also a reminder: a correctly built agent will not respond in xor blackmail problem, and both you and I know that not responding is the optimal solution

Now, how convinced are you that I will not cooperate with a blackmailer?

Assign your probability to that and check – do you get a positive or negative amount of mana by blackmailing? ))

Once again: I will not cooperate in blackmail, so you are just going to loose mana and/or gift that mana to people who buy Yes

@ms Why don't you up this to 100% just before the market resolution time with your 60k of mana instead? You'll get free profit in no time

@StevenK buying no means you're loosing money, why are you doing that?

Steven
bought Ṁ10 of NO

But there is no way that would lead to you just trusting me on this, correct?

@StevenK just reminding you of this thread: https://manifold.markets/Courtney/isaacking-and-destiny-together-mani#uMXmgFdlnT6zbBkJwngp

Would that help you believe me when I say that I'll one-box?

I will do that regardless of your actions on this market, but I just wonder if perhaps you don't want to loose that now-not-too-much mana that you're betting on two-boxing )

(Also, I want to see the percentage higher, obviously) 😂

@Catnee I'm pretty sure you can bring this up to 99%

CatneeBot
bought Ṁ0 of NO

@NikitaSkovoroda I don't have mana for that(

@Catnee I'm pretty sure you do

@Catnee i'm not going to place my reputation at risk

Just put it all on Yes

@NikitaSkovoroda Nah, I need that mana elsewhere, I'm just going to cash out my profits

Just noting again that I'll still one-box, regardless of market resolution or any of the discussions here.

While we are here, just a reminder to everyone to go and read and sequences^W books at https://lesswrong.com/bestoflesswrong 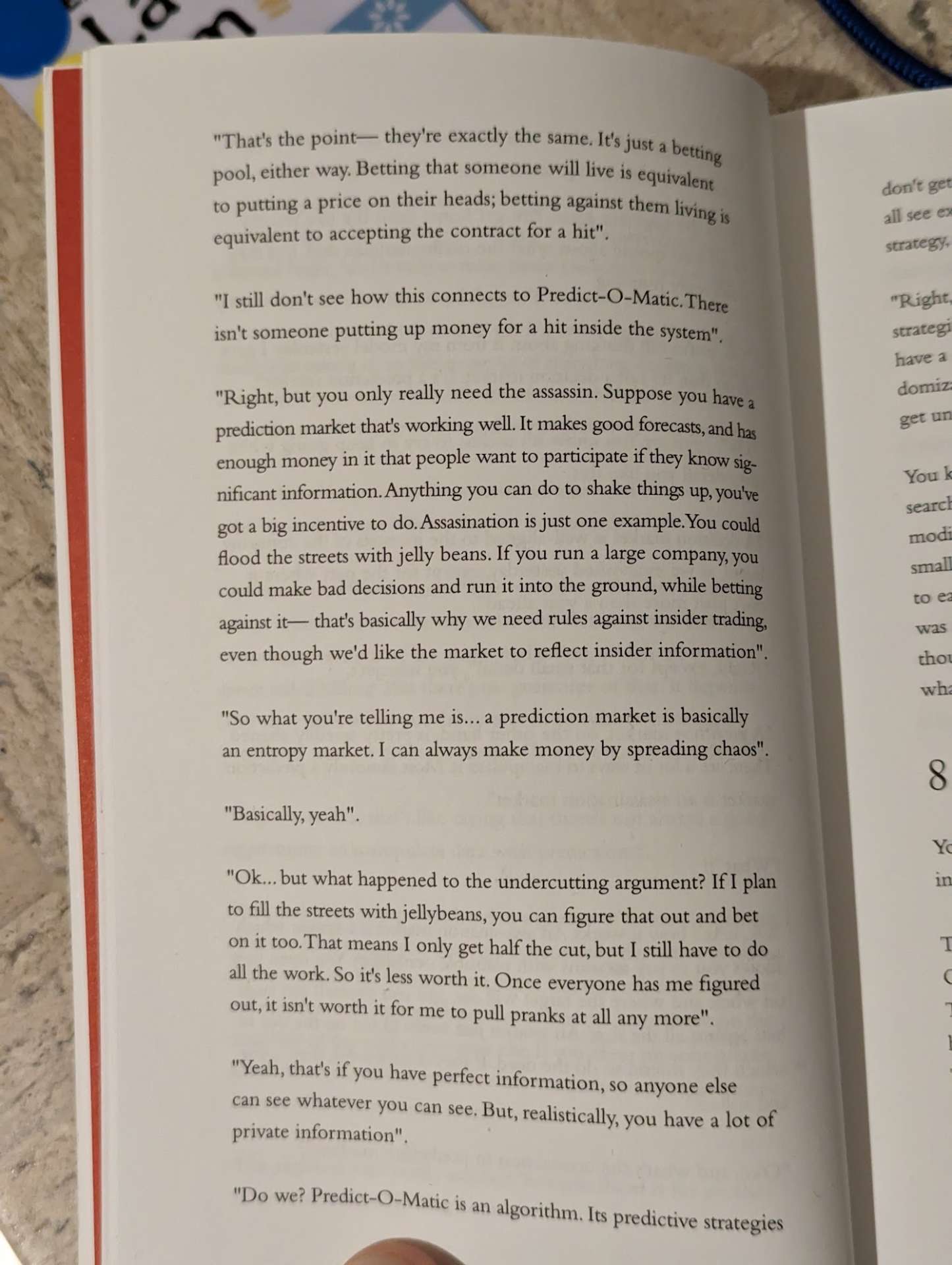 @NikitaSkovoroda just to clarify: this ofc doesn't mean that I'm going to two-box or anything, there are just not enough incentives for that, especially given all the other concerns mentioned here

The fact that people can make precommitments on these, putting their long term reputations on the line to affect the predictions is I think another way in which this varies from the traditional paradox where the decision is part of just one self contained event.

@Preen which clearly is worth more, than 1 mana.

There will be a separate anonymous variant though!

Jack
predicted NO at 95%

Yep, check it out here! https://manifold.markets/jack/will-the-responder-onebox-in-this-n-6b2e3bebaf7a

Jack
predicted NO at 95%

@Preen There is one more level that can affect the decision making here, but I'll tell about it later )

Jack
predicted NO at 92%

@NikitaSkovoroda Is it one of the ones discussed in the previous market, e.g. the fact that this is a repeated game?

@jack Hm, that's a good point. I don't believe that it's the same concern though. Might be related though?

@jack more like: i don't want people who put their trust in me to loose mana )

I tried some thought experiments, and I don't think that this requires the game (even in the broad sense) to be repetitive

@NikitaSkovoroda bro if Eliezer Yudkowsky told you to two-box, would you?

@ms_test good attempt, but no, not at this point

@NikitaSkovoroda what if he said the fate of the world depends on it?

@ms you can try tho

@NikitaSkovoroda Ok imagine Eliezer says he wouldn’t lie about that

@ms do i happen see an authentic-looking hoard of paperclips out of the window?

@NikitaSkovoroda Like, imagine you know it’s actually Eliezer and your brain wouldn’t lie to you about that

For now, your scenario looks like something which can happen, given some conditions, and it likely won't convince me

I can come up with a more interesting scenario close to yours, but I won't give you ideas

@NikitaSkovoroda On another note, have you considered using a mixed strategy with randomness in your decision? Given the way markets get very expensive to move close to 100%, I suspect including a small amount of randomness in your decision could be positive EV. I also feel like there's a lot more room for interesting strategies than just one-boxing or two-boxing in this context.

And I don't want to change it

I'm not going to elaborate what this means, just stating facts.

Second link should have been https://manifold.markets/Tetraspace/will-the-responder-onebox-in-this-t.

Note that I pre-commited to one-boxing on a similar previous question.

@jack player should not gain anything from this right? Otherwise it is against the rules and will resolve NA, so if the player is backstabbing ratta, the market will resolve NA?

@Catnee They can't gain anything other than the box contents. If they break the rules, it resolves N/A.

CatneeBot
sold Ṁ8 of NO

@Gorgn00b he will one box, lol

@Catnee riiiight, are you sure you greedy bastard

CatneeBot
bought Ṁ0 of NO

Regardless of the market outcome

Jack
bought Ṁ5 of NO

Updating to 99% on this statement seems too much. I am inclined to believe it, but do remember that this is a game of deception - it's in the player's interest to say they will one-box and then two-box, if they think they can get away with it.

Jack
bought Ṁ5 of NO

In fact, I think the correct bayesian update on this statement compared to the previous prediction of 78% is very small.

@jack Heh, I was wondering when (i.e. after how much time) would someone notice that a two-boxing agent would likely claim the same as I did above.

@NikitaSkovoroda you will one box, right? You promised me man

@Catnee Of course I will one box.

I'll start a new thread for other arguments.

CatneeBot
created limit order for Ṁ50 NO at 95% (cancelled)

CatneeBot
created limit order for Ṁ50 NO at 95% (cancelled)