Matthew Barnett
closes Nov 6, 2024
US PoliticsAI
Will AI be a major topic during the 2024 presidential debates in the United States?
32%
chance
1D
1W
1M
ALL 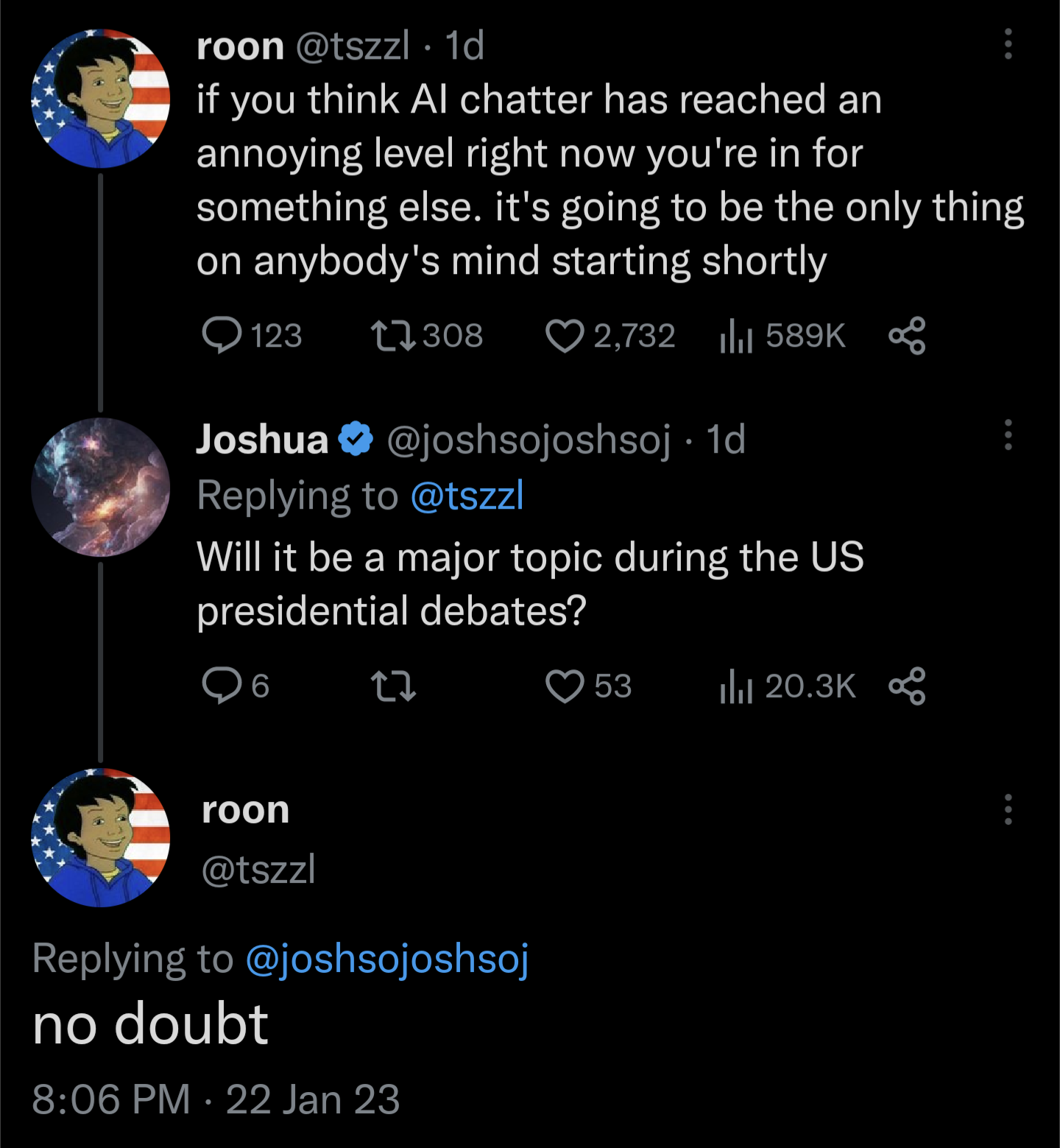 This question resolves to YES if during one of the main (non-VP) 2024 general presidential election debates in the United States, the moderator asks at least two separate questions directly related to artificial intelligence, such as the potential for job losses due to automation, or existential risk from AI. This question also resolves to YES if AI is otherwise brought up by a candidate in the context of a question unrelated to AI and ALL candidates talk about AI at least once during the same debate, with at least one of the candidates saying "AI", "artificial intelligence", "robots" or a close synonym at least three separate times, at least five seconds apart, during the same debate. Otherwise, this question resolves to NO.

Manifold in the wild: A Tweet by Manifold Markets

How does this resolve if there are no presidential debates in 2024?

Matthew Barnett
is predicting NO at 37%

@JosephNoonan In that case it will resolve to N/A.

What's the partisan angle on AI, though, and how can humanity band together to prevent there from being one?

@makoyass I don't think there's a clear partisan angle on it yet. I imagine that it will become more controversial as it gets used for more and more things (we've already seen a bit of that), so there might eventually be clear party lines on how to deal with AI. But I don't think it will outweigh the issues that are typically discussed in the debates, at least not by 2024.

AI is becoming more well-known and powerful, but I don't think that the average person cares about AI enough for it to become a major topic in the debates.

For context in February 2020 I watched the dem primary debate and they didn’t ask the candidates a single question about Covid.

Bolton Bailey
is predicting NO at 42%

Matthew Barnett
is predicting NO at 43%

@jacksonpolack Yep. I didn't mention AGI anywhere in the question.

very happy to be wrong about this

I like this question, this is what Manifold should be about. Subsidized.

Дмитрий Зеленский
bought Ṁ5 of NO

For the "love" of democracy… presuming that they will center on any issue at all is a non-trivial assumption, that the issue will be current is another assumption requiring justification, and then, among the many issues, the chosen one will be the one that's trending now, a rather big time before the debates? I'm not too sure but my probability estimate is certainly below 50%.

Adam
is predicting YES at 40%

@b575 in the past, presidental debates have tended to feature more than one "thing".

Дмитрий Зеленский
is predicting NO at 37%

@Adam True. I believe my point still holds, however. (Especially if we do have Trump rather than DeSantis or whoever as the Republican candidate.)

Peter Wildeford
is predicting NO at 41%

I like this question. I added M100 in subsidy.

Manifold in the wild: A Tweet by Matthew Barnett

Manifold in the wild: A Tweet by Matthew Barnett

Samuel Richardson
bought Ṁ5 NO at 33%

Meredith Triplet
bought Ṁ10 NO at 37%