Forrest Taylor
closes Feb 1
ChessChange My Mind
[Change My Mind] Would chess be more fun if there were no "Mate" rules?
26%
chance
1D
1W
1M
ALL

I just started playing chess and several times so far I have almost put myself in mate or didn't notice a mate. I kinda feel like it would be more fun if you could be sneaky and mate your opponent without them noticing and then knock over their king. I also think I would have more fun on the losing end because it sounds thrilling for me to make a move that I thought was good, and then instantly lose because I wasn't observant enough.

However I don't know why the "Mate" rules are in place, so I wanted to ask about it. Are there good reasons for them being in place, or is it just people being like "it's not sporting 🧐 "?

I will resolve to NO if someone explains to me why not using the "mate" rules would make the game worse and they make sense, and YES if it continues to seem like it would be more fun to knock some kings over. PROB if I'm undecided but I'll try to make up my mind.

This is your chance to change my mind.

I just "drawed" a match that I was totally winning by stalemate. This completely sucks. I'm not winning just because I haven't memorized the checkmate combos. 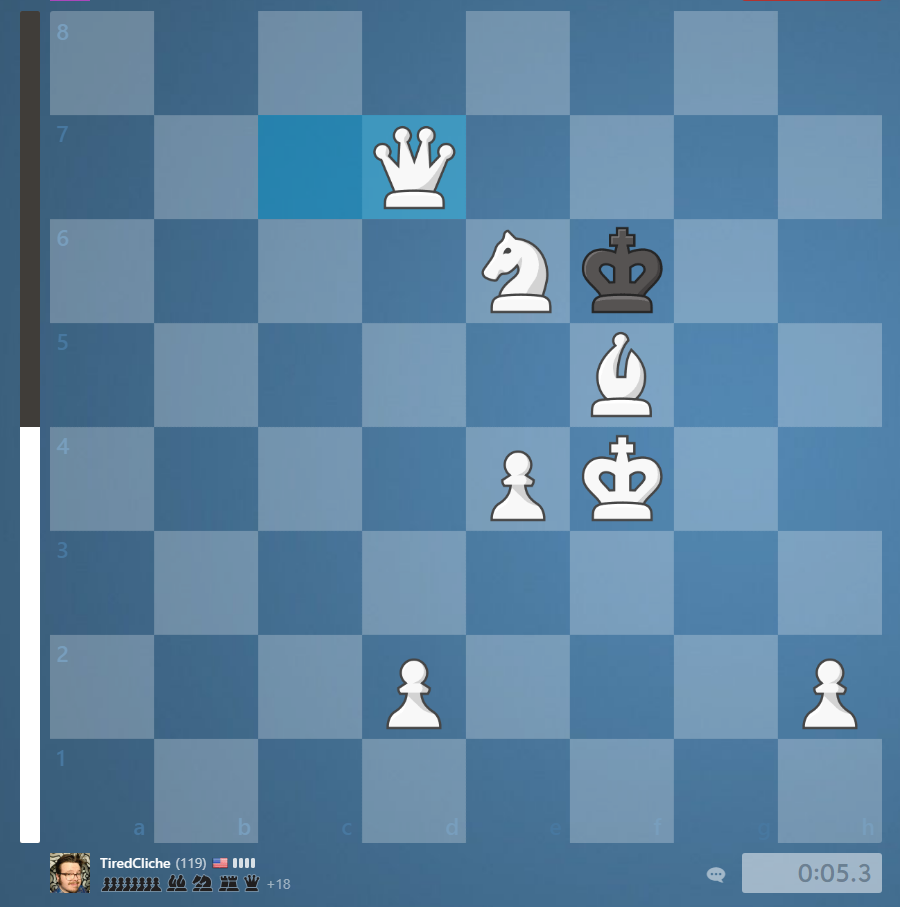 Boklam
is predicting YES at 26%

@ForrestTaylor It comes with practice...

Here's a tip for these sorts of positions: make sure every move is a check. After all, a check can never be a stalemate!

@Boklam Thanks for the tip!

I don't think the change would have a significant impact on the level of fun. Once you get past the "total beginner" stage, you will be able to see checkmates (and checks) at a glance.

(BTW, Ganymede pointed out that for experienced players, this is a significant change to the rules of the game. In practice, aside from blunders, I think it would very, very rarely affect the outcome on a game.)

@Boklam no, lots of endgames have deep theory from the fact that stalemate is a draw. on this proposal, stalemate is decisive win for the stalemate.

@CarloAttubato Just to help me out, could you give some examples of endgames whose outcomes would change?

Actually I just realized king and pawn vs king (in many starting positions) is one such...

Martin Randall
is predicting YES at 28%

Vince Vatter
bought Ṁ100 of NO

Chess isn't fun to start with. Change my mind.

@VinceVatter I respect your argument, and I can't say I feel totally differently considering that for my entire life minus one day I have been nearly completely apathetic towards chess.
However, I should be clear that this market is questioning whether mateless chess would be more fun, not whether it would be fun. E.g., if I come to decide that mateless chess is as fun as a toothache, and standard chess is as fun as getting my teeth drilled sans anasthesia, the market will resolve YES.

Chess needs more changes than that...

@MartinRandall I'm interested in buying this but it seems like people are saying the servers are dead?

Martin Randall
is predicting YES at 50%

@ForrestTaylor probably, that is the way of things

For house rules that would probably be fine, but for professional play it makes sense to end on checkmate rather than on taking the king since it would just be prolonging the game one more round.

Also, from a post I have saved for this exact question:
"If the game was about capturing the king, then it would not be forbidden for the king to move to a threatened square. This, in turn, would ruin a lot of endgame tactics involving stalemates (i.e. the "losing" player actively seeking a last ditch defence where all their pieces are unable to move, resulting in a stalemate)."

@GanymedeAI Well, people can resign anyway. I don’t buy the endgame thing so much. Removing mate would just move the battlefield from stalemate defenses (a frustrating way to lose - though a glorious way to win, see Eric Rosen) to stalemate offenses, which are also interesting but go unrewarded by current chess.

Other benefits: Mate rules make chess more complicated to explain. They also make chess less generalizable, as evidenced by the fact that many variants do not have mate rules.