Has to be accessible from google.com homepage. Has to be open to general public, and easily accessible from Google search home page. Not something you have to get whitelisted for, be in a small experiment or meticulously look for in some settings dialog.

What makes something a chatbot? You used to be able to do, on Google:

[who is barack obama]

Trying now, this doesn't work, but if they brought it back would you count it?

What if they extended it slightly, so that search queries that seemed like they were continuing the previous query got answers combining the two queries?

I'm assuming no for the first question, and probably also no for the second, but it would be good to know.

@JeffKaufman I'm assuming they'd advertise at as such so it would be hard to deny. Good question though.

Gretta Duleba
is predicting YES at 25%

Google already has that Lambda chat bot (the one where the guy thought it was sentient!). I'm sure they're desperately trying to figure out how to integrate this into Google search as we speak.

ChatGPT has shown that LLM are an existential threat to Google's search business. Competing with that will be priority no. 1 for Google at the moment. They're even leaning into the founder-hero myth by bringing back Larry and Sergey to try and solve this.

I think the real question here is going to be what form will this AI chatbot integration take with Google.

nfd
is predicting NO at 46%

@nfd I don’t know how to imagine it correctly enough, but my naive intuition is that an LLM with live access to external datasets, and maybe some “hidden sketchbook” faculty, where it could invisibly iterate over drafting answers and checking sources, might have better results.

The larger question is when Google could deliver this product. I don’t claim it’s a good analogy, just as an illustration: Gmail was developed for some 1–3 years and then spent another ~3 years in a (more and more easy to get into) invitation-only beta stage. They have been speaking of a private beta again in this context. Also, will it be directly integrated into Google Search, or exist as a different service?

Tom Cohen
bought Ṁ10 of NO

@yaboi69 I agree, the timeline is the main thing here. Knowing big tech well from the inside - six months is a ridiculously short timeframe to change something as fundamental as the Google.com search page. I’d be surprised if there would even be a clear alignment on interface by then.

It’s not they couldn’t technically do it by the end of June, it’s that you don’t take shortcuts on a hundred billion dollar product.

Samuel Richardson
is predicting YES at 33%

@TomCohen That's true, but remember the market mentions just that it will include the chatbot. I've assumed this doesn't necessarily mean general availability to all public, just that it has an integration of some kind. I.e. rolled out for a very small, select group of beta testers would qualify this market as a YES.

nfd
is predicting NO at 31%

@SamuelRichardson does Google ever roll out testing features to Search to the general public like this?

@nfd They're nearly always A/B testing various features. Usually they're small things like colours, sticky headers, changes to the adverts. However, I don't doubt they'd follow a similar pattern for integrating a chatbot.

I would not expect a radically different UI to what they have now, i.e. you still execute a search from a text box on the homepage to get started.

I think the main thing that might resolve this market as a no is if it doesn't act as a chatbot does (i.e. the backwards and forwards). For example, I could imagine a set of buttons that you click instead of typing back to the bot to explore further results.

@SamuelRichardson earlier in the comments, @agentydragon said that the chatbot "Has to be open to general public, and easily accessible from Google search home page. Not something you have to get whitelisted for..."

@mndrix Great. Why isn't that in the (blank) description for the market.

nfd
is predicting NO at 31%

@nfd That could well be true however it is totally up to the whims of @agentydragon I assume based on comments they've made now and will make in the future as to how this market resolves.

Not that I'm bitter 😂 IMHO this market should resolve based on the criteria stated when the question was created (Will Google Search include a chatbot by end of June 2023?) but this is a problem that is fairly common on the site.

Jack Galler
is predicting YES at 28%

What about google assistant? If I search by voice from my phone I already get a "chatbot". Now, I know, it's not very ChatGPT-ish. I'm guessing you wouldn't include it?

@JPAddison if Google assistant becomes available to talk to via the Google search form (with ability to have a multi-turn back-and-forth), that would count

To clarify, chatbot has to be usable via keyboard from a PC

Jeff Kaufman
bought Ṁ50 of NO

@agentydragon Aside from the "keyboard" requirement this works today. On my PC I can click the "mic" option and do:

[who is the president]
> Joe Biden

> he is six feet tall

Thagliou
is predicting NO at 30%

Weird that the market is at new equilibrium after the dump.

@jonsimon Yesterday, Mira exited large positions in a number of markets to make a play in https://manifold.markets/Gamble_market/this-market-resolves-yes-unless-tra-d8a8536ea76a.

Reynolds
is predicting YES at 20% 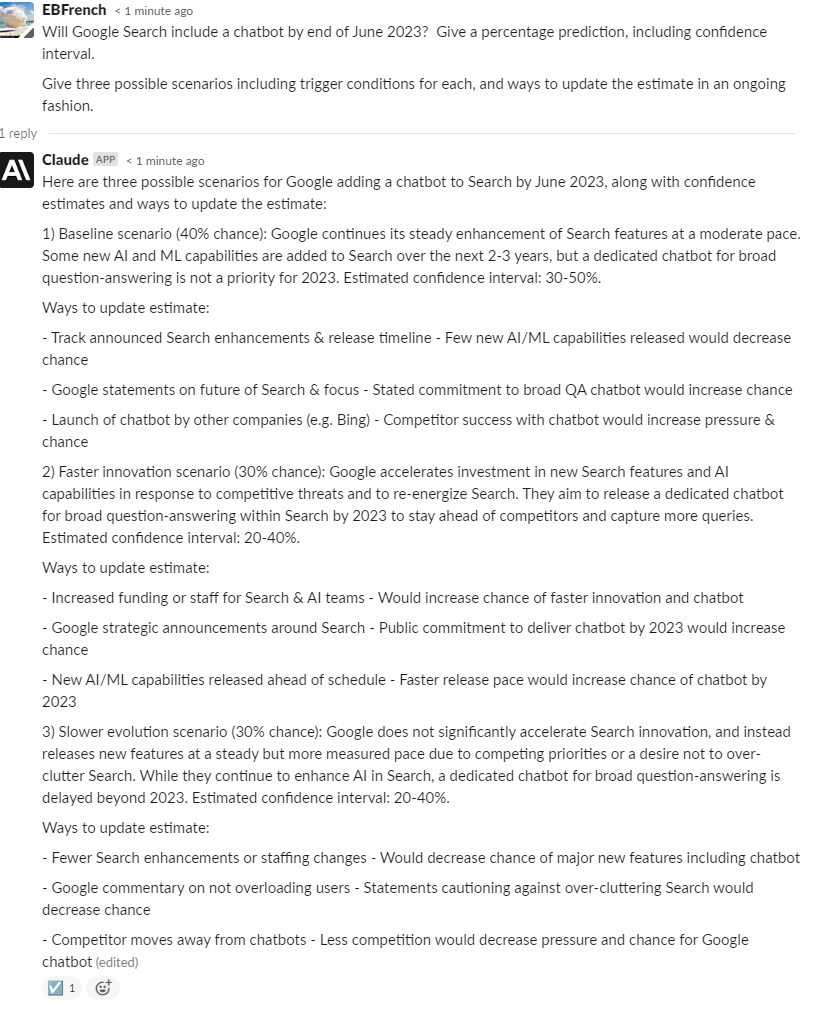 This needs more specifics. Google already embeds BERT into the back end of search.

Patrick Delaney
is predicting YES at 23%

@k3nneth BERT is a language model, not a chatbot. See my youtube video for an explanation of the differences. https://www.youtube.com/watch?v=whbNCSZb3c8

@PatrickDelaney i’m well aware of the difference lol. you should be more specific for those that aren’t.

Patrick Delaney
is predicting YES at 21%

@k3nneth My video goes through it extensively, but in short:

Large Language Model (LLM), such as BERT is a parrot with the input being tons of scraped text from the web and the output being a string of next word probability

That is literally not true. BERT is not an auto-regressive model, it does not produce next word probabilities. It is an encoder-only model, one of whose fine-tuning tasks is to guess specific masked words using both preceding and following words as input.

If you described BERT that way in your YouTube video, you should add a correction.

Connor McCormick
bought Ṁ30 of NO

If Google ends up launching a chat feature that doesn’t directly show up after searching, how does this resolve (eg if they launch chat.Google.com)?

@ConnorMcCormick based on the comments @agentydragon madebelow[1], your scenario would resolve Yes if there's to it from the homepage.

Chris Gillett
bought Ṁ25 of NO

I've seen it reported that this is one of their main areas of investment, but I don't see Google shipping that within 6 months.

@ChrisGillett my biggest question is whether Google will just make PaLM, LaMBDA, or Chinchilla publicly accessible somewhere. If so, that could happen very fast. They've had great language models for a long time but have been too cautious/fearful/gridlocked to make them available externally.

Very likely Google would try to match this somehow.

Does the chatbot have to be accessible from the Google homepage to resolve Yes? What if Google releases a separate/beta search experience elsewhere on their site that behaves as chat bot? Thanks.

@mndrix has to be accessible from google.com homepage. Has to be open to general public, and easily accessible from Google search home page. Not something you have to get whitelisted for, be in a small experiment or meticulously look for in some settings dialog

@agentydragon If there’s a small link on the bottom that calls it out (like they do sometimes for sales on Pixel phones) for a few days, would that resolve positively?

Jeff Kaufman
is predicting NO at 34%

@mndrix does "accessible from" mean a single click from the home page? I'm assuming it can't be typing "google chatbot" into the search field and the clicking the first link, but could it be "click the grid of nine dots in the upper left, then click one of the 40 products"?

Odoacre
created limit order for Ṁ15 NO at 40%

Ivan
created limit order for Ṁ50 NO at 50% (cancelled)

Jascha Sohl-Dickstein
bought Ṁ10 NO at 31%